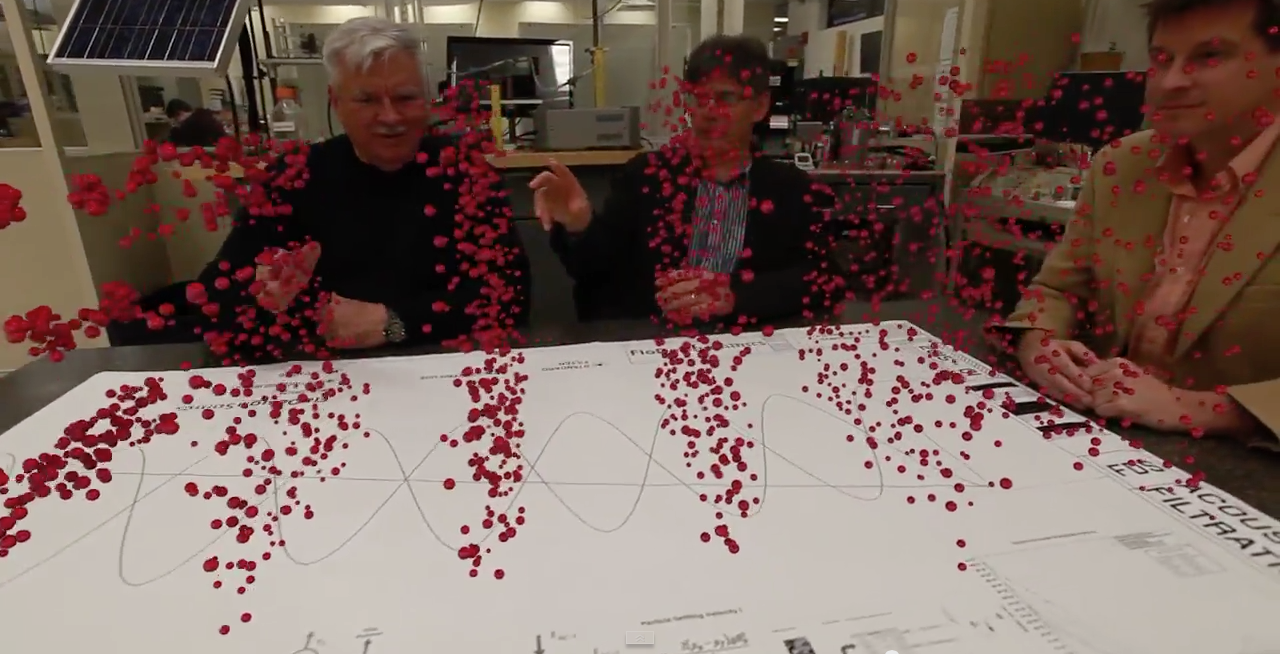 Story by Helen Hill for MGHPCC
FloDesign Sonics is using MGHPCC to understand micron sized particles' movement inside 3D acoustic fields. Such types of calculations involve solving trajectories of tens of thousands of particles and their effect on the flow field along with particle-particle collisions. Due to the complex nature of such computations, a supercomputer like MHGPCC is an ideal resource. The resulting data helps them understand the physics behind acoustical trapping, clustering and separation of particles from the bulk fluid and the type of acoustic field and geometry required for a more efficient process. This helps in optimizing their systems and aids product development. Flowdesign was funded to use MGHPCC by a capital grant from the Massachusetts Life Sciences Center.

From the coffee machine to the oil refinery, from the pharmaceutical industry to food production, filters are everywhere.
Traditional methods of filtration rely on the passage of a fluid through a porous barrier: Suspended particles above a particular size are blocked while the carrier fluid passes through.
Alternatively there is the centrifuge, a rapidly rotating drum that spins fluid around to separate suspended particles.
A limitation with the first method is clogging of the filter; of the second (in the case you are interested in harvesting the suspended particle rather than the carrier fluid) the associated centripetal forces may damage the particles you are seeking to collect.
FloDesign Sonics’ new acoustic filtration technique offers an innovative third way, obviating both drawbacks through a combination of acoustics and gravity.
Standing waves are created in a medium when waves emitted from the source interfere with waves reflected back to it. When this happens specific points within the medium appear to stand still. While the surrounding fluid isn't affected, the pervading sound field marshals the suspended particles into these still points or "nodes".
The FloDesign Sonics team have developed a process for creating a three dimensional acoustic wave that induces a clumping together of the suspended particles allowing them to sink under gravity and be removed.
No filters to get blocked; nothing to damage the extracted particles.
Today companies like FloDesign Sonics need tremendous computing resources to accomplish their goals. FloDesign Sonics benefited from access to the Massachusetts Green High Performance Computing Center (MGHPCC) to undertake computational research and development needed to advance our technology to market.
“Had the MGHPCC not been available, our products would not be so close to market as they are”, said FloDesign Sonics chairman Stanley Kowalski III. “We are enormously grateful to have had access to the computing power at the MGHPCC.”

Tags:
featured, research
Previous Post:
«
UMass Amherst biochemist named a Burroughs Wellcome Fund Investigator
Next Post:
City of Holyoke Announces 2015 Scholarship Recipients
»
Do you have news about research using the MGHPCC? If so get in touch.
Email Us