The Trouble with Turbulence

Story by Helen Hill
In contrast to laminar flow, in which a fluid moves in smooth paths or layers, turbulent fluid flows are chaotic, vary in three-dimensions, and are unsteady over a wide range of scales creating an ongoing challenge for the physicists, mathematicians, and engineers seeking to understand, model, and innovate new techniques and applications involving them. Complicating modeling non-equilibrium turbulent plasmas is the range of multi-scale physics that must be included.
Seyedeh Mahnaz Modirkhazeni, a PhD candidate attached to the Re-Engineering Energy Laboratory in the Mechanical Engineering Department at UMass Lowell, has been using computers at the MGHPCC to explore a new technique for modeling non-equilibrium turbulent flows of the kind generated in direct current (DC) arc plasma torches; a tool found at the heart of many industrial thermal plasma processes among them metal cutting and welding, thermal plasma chemical vapor deposition (CVD), metal melting and re-melting, waste treatment, and gas production.
Plasma spraying is an example of an application reliant on DC arc plasma torches that has become a well established and widely used technology for the manufacture of coatings resistant to wear, corrosion, and temperature for the generation of near-net shapes of metallic and ceramic parts. For instance, plasma-sprayed coatings enable turbine blades to withstand temperatures up to 1200 °C, and provide prosthetic implants unparalleled wear-resistance.

Broadly there are three techniques for modeling turbulence in fluids: direct numerical simulation (DNS) where the modeler seeks to accurately model the flow by solving the equations of motion exactly, Large Eddy Simulation (LES) where large scale features are resolved but smaller scale dynamics are modeled separately, and, intermediate to the two, Reynolds Averaged Navier Stokes (RANS) simulations which combine time-averaged flow-quantities with properties of the turbulence as indexed by the Reynolds Number to predict for the flow.
Currently there exists no viable computational tool to solve for non-equilibrium plasmas: The direct computational exploration of non-equilibrium turbulent plasma flows is extremely expensive and often unfeasible due to the diversity of phenomena involved as well as the large range of scales that need to be resolved, e.g., from charge dynamics and molecular diffusion at microscopic scales to advective transport within the spatial domain size. Therefore, coarse-grained simulation approaches, which accurately describe large-scale flow features only and model small-scale ones, are needed to widen the range of regimes it is currently possible to explore.
Non-equilibrium turbulent plasma simulation - credit: Seyedeh Mahnaz Modirkhazeni
A new method being developed by Mahnaz and her colleagues offers a consistent, complete, and computationally more viable approach for simulating this class of flow. Variational Multi-scale-n or VMSn is a superset of the variational multi-scale (VMS) approach, a versatile and robust method used widely in multi-physics solvers,  based on the Finite Element Method (FEM.) Finite element models subdivide a large problem into smaller simpler parts called finite elements. The simple equations that model these finite elements can then be assembled into a larger system of equations to model the entire problem.
VMSn uses a variational decomposition of scales (similar to traditional LES) together with a residual-based approximation of the small scales (using the framework of VMS) without the need for empirical parameters. This novel method is allowing Mahnaz et al. to more accurately simulate the behavior of a non-equilibrium turbulent plasma for a lower computational cost.
About Seyedeh Mahnaz Modirkhazeni: 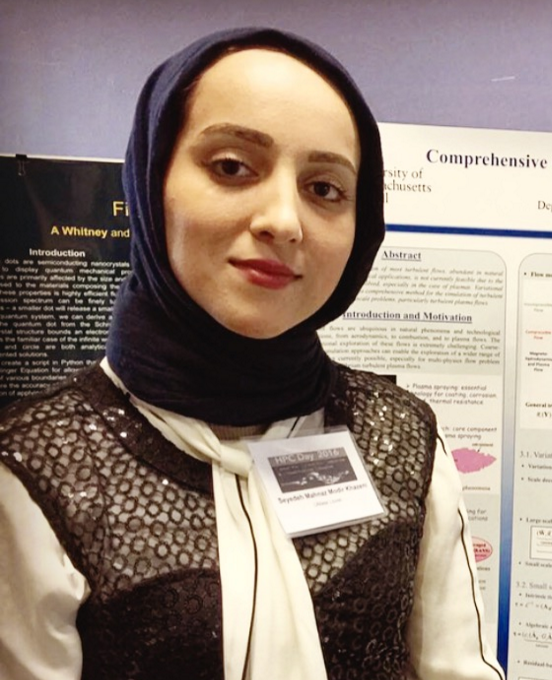 Seyedeh Mahnaz Modirkhazeni is a PhD candidate in the Department of Mechanical Engineering at the University of Massachusetts Lowell, working under the supervision of Prof. Juan Pablo Trelles. Before coming to UMass Lowell in 2013, she earned her master degree in mechanical engineering-energy conversion from Ferdowsi university of Mashhad in Iran where she worked on analysis of Condensation on an elliptical tube Her undergraduate degree was in Mechanical Engineering with concentration on fluid mechanics at Ferdowsi University of Mashhad in Iran where she researched condensation phenomenon on different surfaces.
Her research focuses on the coarse-grained comprehensive simulation of nonequilibrium atmospheric-pressure turbulent plasma flows, which will enable the computational exploration of a wider range of flow regimes than currently possible without relying on empirical model approximations or tuning parameters.
Publications 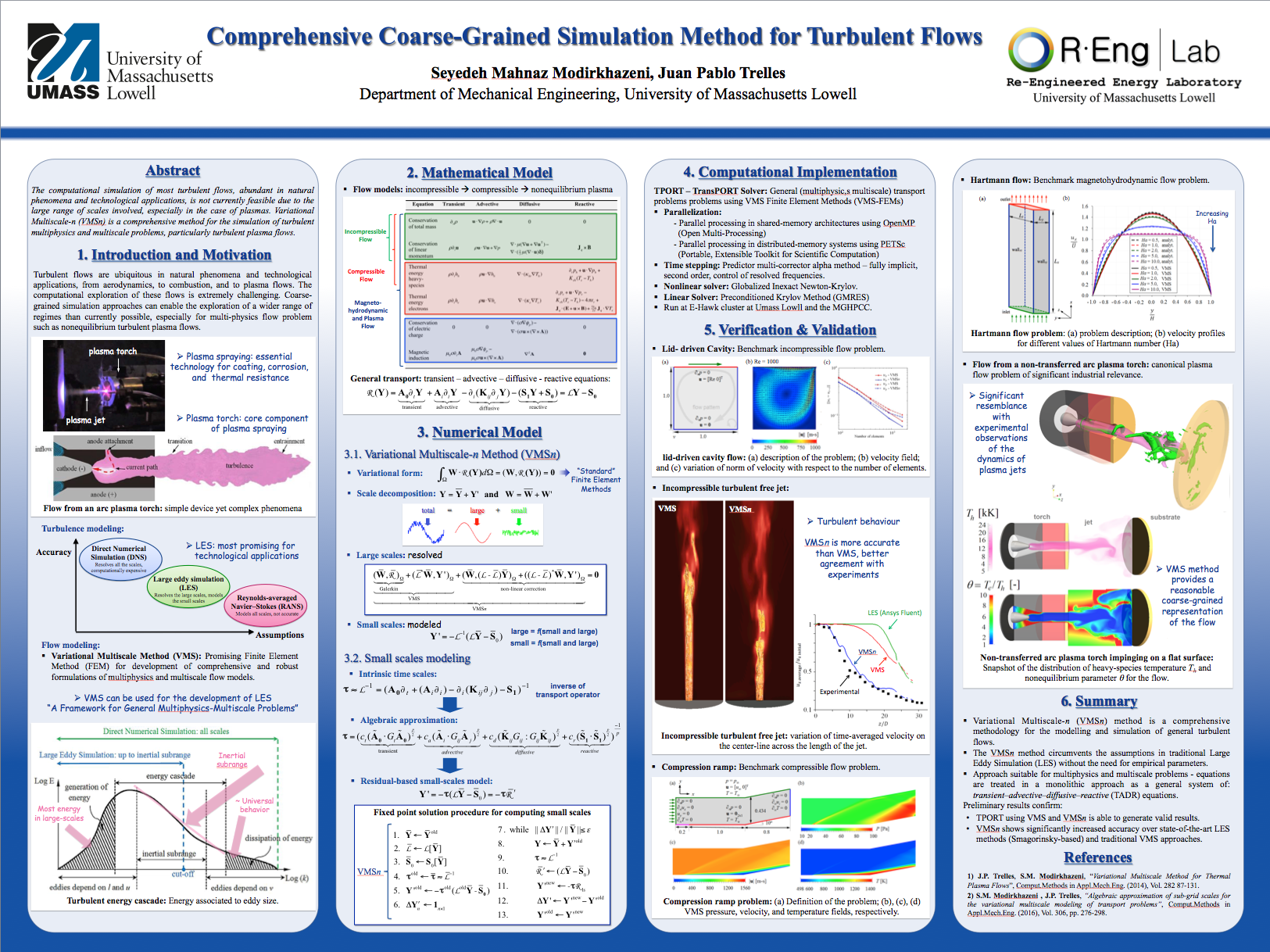