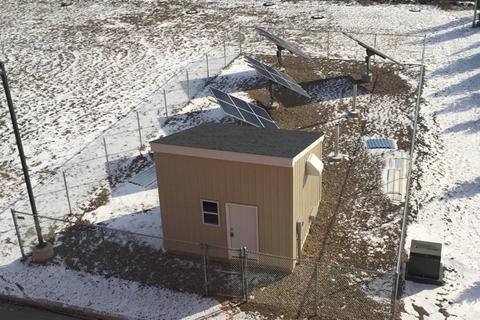 Read this story at  UMass News

One of the recent revolutions in computing has been the advent of cloud-based platforms, which handle everything from music and video streaming to crunching enormous amounts of data for scientific research. Cloud infrastructure, used by companies like Apple, Google, Facebook, Amazon, and others, is growing exponentially, and demands an ever-increasing amount of energy, and any serious attempt to grapple with global climate change will therefore have to address computing’s carbon footprint, says a University of Massachusetts expert leading a team to work on the issue.

A multi-university team of researchers, led by Prashant Shenoy, distinguished professor in the University of Massachusetts Amherst’s College of Information and Computer Sciences (CICS), will be tackling this challenge thanks to a $3 million grant jointly administered by the National Science Foundation and VMware, a private technology cloud-computing company.

Part of the answer to achieving zero carbon computing is in moving to renewable sources of energy, but, says Shenoy, “the great challenge of renewables is that the sun doesn’t shine all the time in every place, nor does the wind always blow, but computing happens 24/7. How do we get renewable energy from where it is being made to where it is needed by computing tasks?” The CarbonFirst team includes UMass researchers Ramesh Sitaraman, Mohammad Hajiesmaili, and David Irwin, as well as collaborators from Worcester Polytechnic Institute and California Institute of Technology.

The project builds over a decade of research in carbon-aware computing at UMass, which has emerged as a global leader in this area. “UMass is really unique globally in the concentration of people it has working at the intersection of computing and sustainability, which, as this project demonstrates, is becoming an increasingly important topic in both industry and society. This concentration of expertise enables us to do `big’ things at UMass that just aren’t possible at many other places.” says Irwin.

The team envisions building a self-powered, decentralized network of computing hardware, solar batteries, and free cooling hubs that are widely distributed. This is a reversal of the dominant trend in cloud computing, which concentrates computing centers, and energy needs, at only a few locations. Such distributed cloud and edge computing is much more easily able to leverage local renewable energy sources.

“This new grant builds on UMass Amherst’s already impressive research record in sustainable computing, drawing on the expertise of researchers with considerable experience in this critically important area of computer science,” says Laura Haas, dean of CICS. “Their work to find new methods for making cloud computing more energy-efficient is a perfect example of our college’s vision of ‘Computing for the Common Good.'”

The team also plans to “virtualize the energy system,” which means designing software that can monitor its own energy needs and carbon emissions. If the energy needs at a specific location exceed local renewable energy sources, computing applications can seamlessly move to another site that has surplus renewable energy. And since the massive, energy-intensive cloud computing centers will be around for years to come, the team will be engineering digital carbon-capping policies, that track applications’ use of traditional grid-based carbon emissions and restricts energy to renewable sources after reaching the cap.

The team will demonstrate their concept at the Massachusetts Green High Performance Computing Center in Holyoke, and the fruits of the team’s research will be made publicly available. “We are going to put out the source code and the data sets, so that others can leverage our findings,” says Shenoy.

“UMass Amherst has an extraordinary track-record of research and leadership in renewable energy, climate science and sustainability across multiple departments and colleges,” says Sanjay Raman, dean of the UMass college of engineering. “Recently, we have launched the Energy Transition Institute, focused on transforming our energy systems while also promoting the socioeconomic equity of communities. The important work of Prashant and his team perfectly complements and builds on these ongoing efforts.”

Tags:
press release, research
Previous Post:
«
July Publications
Next Post:
August Publications
»
Do you have news about research using the MGHPCC? If so get in touch.
Email Us