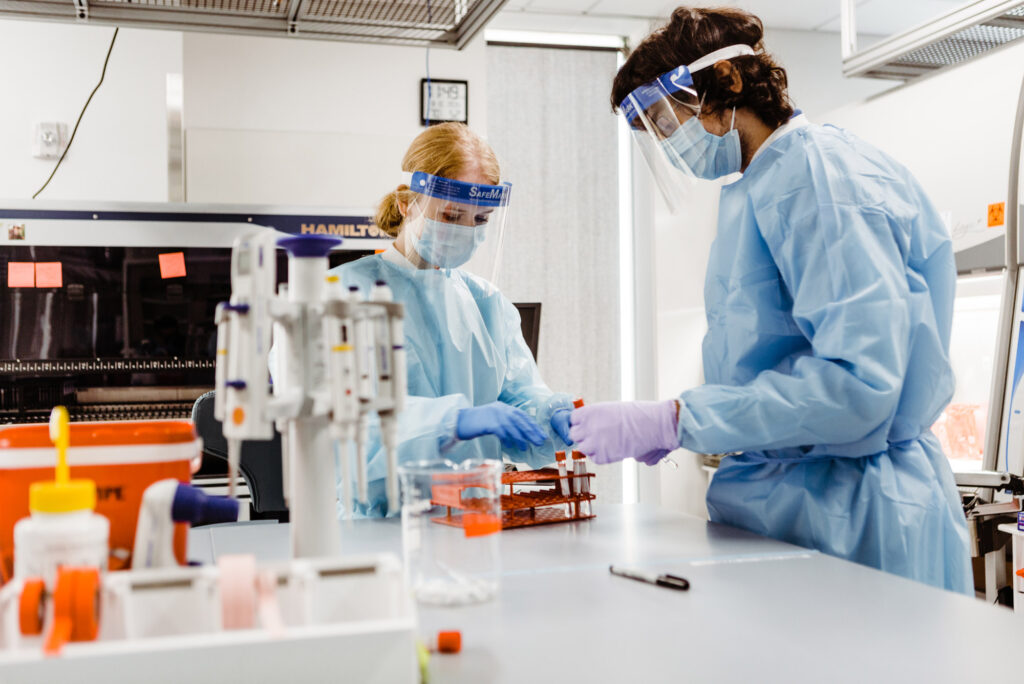 The Story, and the Science, behind BU’s COVID-19 Dashboard

Armed with high-performance computing resources at the MGHPCC, BU scientists are “all hands on deck” supporting a one-of-a-kind system comprising custom software, real-time campus network modeling, contact tracing, and case cluster management.
Read this story at BU News
On August 17, Boston University began posting the results of its university-wide coronavirus testing program on a public-facing dashboard. Visitors to the site can now instantly see how many tests BU has performed in the past day or the past week, the total number of positive, negative, or invalid cases recorded, the overall percentage of positive cases at BU in comparison to the city of Boston and the Commonwealth of Massachusetts, and more.
“Because of the huge amount of anxiety surrounding this disease, what’s so important is that we be as transparent as possible about exactly what we’re doing, what the health of our community is, and how it’s changing over time,” says Robert A. Brown, BU’s president. The public-facing dashboard, he says, is meant to give people confidence in BU’s coronavirus surveillance and containment efforts—a process that not terribly long ago would have seemed unimaginable for a university to undertake entirely on its own.
Brown says the dashboard will help answer the important question: in terms of infection rate, “is BU better off or worse off than the community at large? That’s the transparency we need to know, and the community around us needs to know.”
But the public-facing dashboard represents only one of many aspects in BU’s broad coronavirus efforts. The university-wide testing program hinges upon the new BU Clinical Testing Lab, which was rapidly outfitted with machinery and custom software over the summer. Now up and running, it’s capable of processing up to 6,000 coronavirus tests per day.
“One thing we did early on was to commit to building out a testing facility at BU,” Brown says. “As we first began understanding this disease in March and April, it became clear to us that there would be no way to control spread within a university without surveillance testing.” That’s because scientific studies indicate that up to 40 percent of people infected with coronavirus could be asymptomatic, putting them at risk of unknowingly spreading the virus to others. “Routine testing is the only way to find everyone who’s infected.”
Brown appointed Gloria Waters, BU vice president and associate provost for research, to coordinate teams of BU scientists to make an on-campus coronavirus testing and surveillance program a reality—and to do it quickly, so it would be ready for the arrival of students come August.
“The testing itself is only a part of our program,” Brown says. “Without the testing, you’re blind—with the testing you have data about the people in your community who have the virus. Then the question is, what do you do with that data? The whole area of contact tracing, quarantining, placing infected people in isolation, being able to counsel people so that they comply with guidelines, having the right software that moves this data to the people making decisions based on that data—this was an all-hands-on-deck moment for BU’s scientific community.”
Simulating BU’s community using network science

In planning for the return of residential undergraduates, BU also made use of epidemiological tools that calculate, given a student’s state or country of origin, how likely they are to arrive at BU already infected with coronavirus.
“You can calculate these probabilities using individualized data about the student body, to say, if someone is coming from a specific place, how likely are they to bring coronavirus to you?” Brown says. “We have those estimates, and we’re ready. It’s one reason why we spread out the return of our students over several weeks, so that we can deal with infected students, systematically, as they arrive on campus.”
So far, Brown says, the actual infection rate has been far lower than what the calculators estimated.
As students, faculty, and staff return to campus, Kolaczyk and the modeling team are switching over the simulation so that instead of modeling historical data, it models what’s happening at BU—and who exactly is on campus—in real time. For that to be possible, Bulekova and others from BU IS&T designed custom front-end and back-end software to make it easy for departments across BU to easily input the most up-to-date data into the simulation.
“We’ve been marrying up the data on record about students through online portals collecting information about where students are, how they each plan to use the Learn from Anywhere (LfA) options, what their class schedules are, what home state they are coming from—there’s a whole variety of information being fed into the software,” says Linette Decarie, assistant vice president of analytical services and institutional research at BU IS&T. “Some of this information we glean directly from the students; they have access to an online portal where they can indicate their plans to go to class or to learn online, and they can update that information at any time.”
Using all these data points combined with test results from the BU Clinical Testing Lab, the campus simulation will function like a heat map, says Carrie Landa, director of behavioral medicine and associate director of clinical services at BU Student Health Services, providing BU’s healthcare and contact tracing teams with a detailed view of any coronavirus activity in specific buildings, dorms, and classrooms.
“This data will help us decide exactly which resources we need to implement to respond to cases and prevent further spread,” she says. Since April, Landa has been serving on BU’s Medical Advisory Group, which was pulled together by Brown in response to the pandemic.
“We will scrutinize the data daily for weak points that could cause concern, such as how many of our isolation units are being used, how supply chains for testing materials are functioning, University staffing levels, and more. There are more than 20 metrics we’ll be looking at,” Brown says. He and other university presidents from across the state are part of a higher education task force, organized by Massachusetts Governor Charlie Baker, that has provided recommendations on strategies to safely reopen universities</a. Decarie also provided support to that higher education task force.
Keeping a close eye on community adherence

Tags:
research
Previous Post:
«
Op-ed: The most important scientific job you've never heard of
Next Post:
August Publications
»
Do you have news about research using the MGHPCC? If so get in touch.
Email Us