Observing Saturn as an Extrasolar Planet,
One Ray of Light at a Time

Story by Paul A. Dalba, for MGHPCC 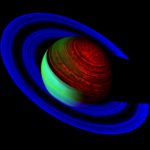 A false-color image of Saturn taken by the Cassini Spacecraft showing the “glow” of Saturn at infrared wavelengths. Credit: NASA/JPL/University of Arizona.

What would Saturn, the beautiful ringed planet, look like to an alien species on a distant planet? This question is of particular interest to astronomers who study planets that exist far beyond our solar system or “exoplanets.” Although we have not yet discovered an exoplanet with properties exactly matching Saturn’s, the answer to this question holds important consequences for future studies of giant exoplanets. This suggests that before we go looking at planets elsewhere in the Galaxy, perhaps first we should take a closer look at those in our own solar system.
Exoplanetary science is one of the most rapidly evolving disciplines in Astronomy. Not only have astronomers discovered thousands of exoplanets, they have also developed methods to study the atmospheres harbored by these distant worlds. One method, known as transmission spectroscopy, relies on measuring starlight that has passed through an exoplanet’s atmosphere before reaching telescopes here at Earth. During its trip from the star to the telescope, this light becomes encoded with information about the chemical makeup of the exoplanet’s atmosphere. Transmission spectroscopy has proven successful when applied to planets that orbit closely to their host stars, making their atmospheres very hot.
In our recent paper, The Transit Transmission Spectrum of a Cold Gas Giant Planet, we describe our attempt to apply this technique to a cold atmosphere. Of the cold exoplanets discovered to date, very few have the correct alignment such that light from the star can pass through the exoplanet’s atmosphere before reaching the Earth. However, our own solar system contains several cold planets that have been studied from nearly every angle with various spacecraft. We acquired a dataset taken by NASA’s Cassini Spacecraft, which has been orbiting Saturn and its many satellites (moons) since 2004. The dataset consisted of brightness measurements of the Sun as it set behind Saturn as seen from the spacecraft. 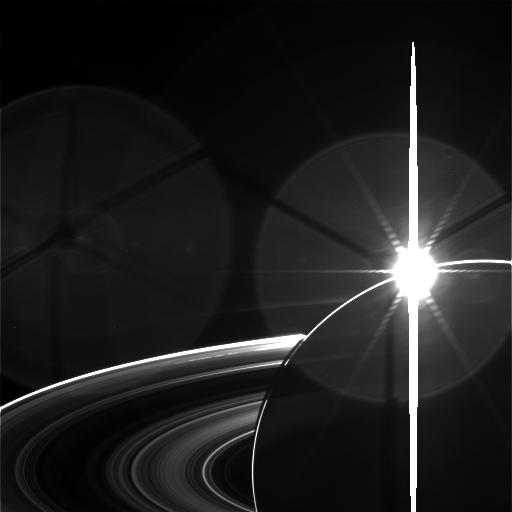 A raw image taken by the Cassini Spacecraft of the Sun appearing to set behind Saturn. Credit: NASA/JPL-Caltech/Space Science Institute.

To study Saturn as an exoplanet, we first had to use the spacecraft data to develop a theoretical model of Saturn’s atmosphere. We built this model through ray tracing: the process of calculating the properties and direction of a ray of light as it travels from one point to another. We used the MGHPCC to calculate the paths of numerous rays of light through Saturn’s atmosphere. In empty space, light travels in a straight line. In an atmosphere, however, light travels in a curved path due to atmospheric refraction. Describing this motion requires numerically solving several differential equations. The computational difficulty arises from the fact that these equations must be solved thousands of times for each ray of light in Saturn’s atmosphere, and the full solution requires tracing thousands of rays. With the MGHPCC, we could tackle this problem with parallelization. We assigned a single CPU to each ray, which was completely independent of every other ray. Then, we could allow the paths of many rays to be calculated at once, making the project much more tractable.
With our theoretical model of Saturn’s atmosphere, we were ready to imagine Saturn as a distant exoplanet and repeat the process of ray tracing to create synthetic observations. By doing this, we directly answered the question: What would a distant alien civilization learn if they tried to study Saturn with the methods we currently apply to exoplanets? We learned that the technique of transmission spectroscopy could indeed be used to characterize cold exoplanet atmospheres with telescopes that are already in use at the present time. We also found that the process of atmospheric refraction, which is typically ignored in studies of hot planets orbiting closely to their host stars, will play a significant role in future observations of cold exoplanets orbiting far from their host stars.
Lastly, this project demonstrated the value of synergies between planetary science and exo-planetary science. The study of exoplanets is only a couple decades old, while the study of planets in general has existed for many centuries. Our understanding of planets spread throughout the Galaxy can be aided by the observations of those in our own celestial backyard.
About Paul Dalba: 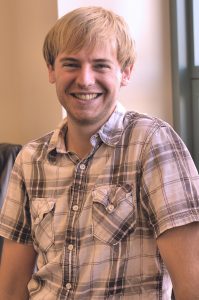 Paul Dalba is a third-year graduate student in the PhD program in the Astronomy Department at Boston University. Before joining B.U. in 2013, he spent a year at the Jet Propulsion Laboratory in Pasadena, CA doing data analysis and other mission support work for various NASA missions such as Cassini, Dawn, and New Horizons. His undergraduate degree was in Astrophysics at the University of California, Berkeley where he researched asteroids and star formation.
Dalba’s current research focuses on the atmospheres of planets that orbit stars other than our Sun, known as exoplanets. A particular interest is in cold giant exoplanets and how they inform our understanding of how planetary systems form and evolve in time.
Related Links
Boston University Department of Astronomy
Institute for Astrophysical Research, Boston University
Press
BU’s Shared Computing Cluster: Results Hundreds of Times Faster
Helping astronomers study cold atmosphere exoplanets BU Today

Tags:
featured, research
Previous Post:
«
Big Data, Massive Potential
Next Post:
Family Creative Learning Workshops
»
Do you have news about research using the MGHPCC? If so get in touch.
Email Us