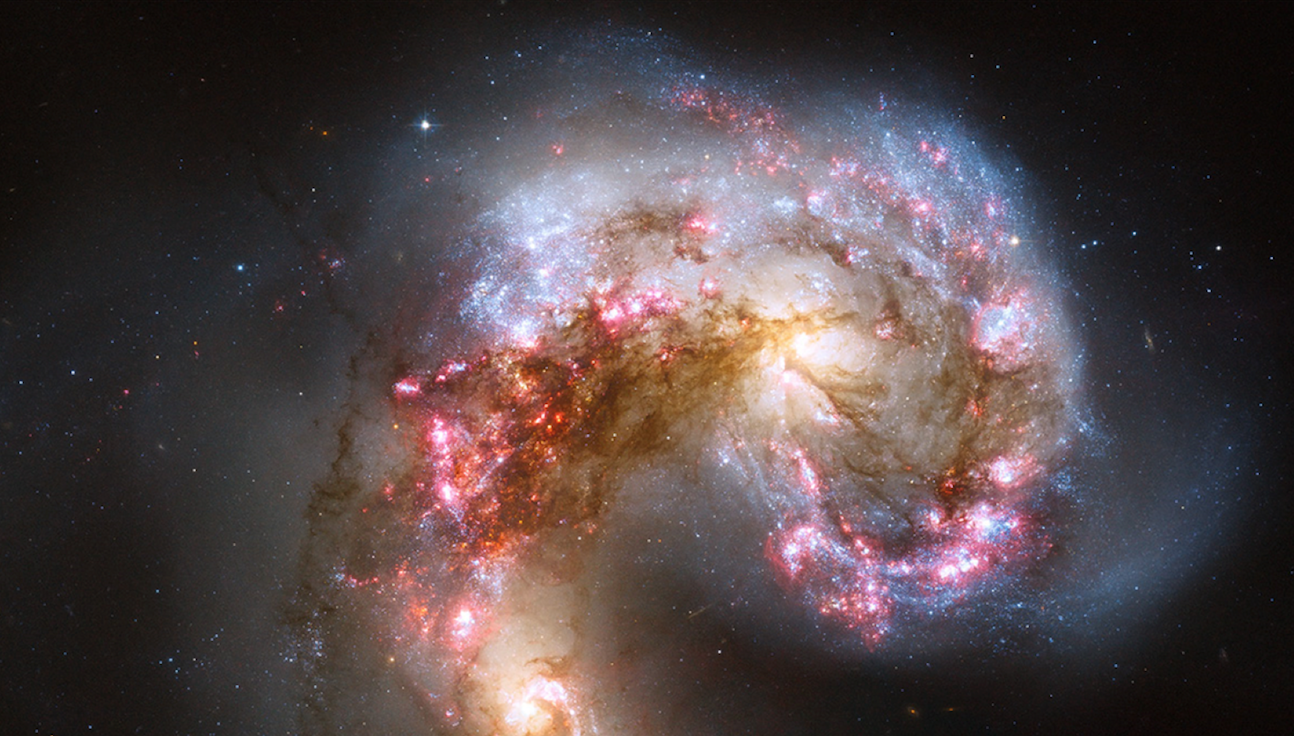 Dusty with a Chance of Star Formation

by Helen Hill for MGHPCC News
Grant Wilson is a professor of astronomy at Umass Amherst. Wilson’s research lies at the intersection of new cameras and telescopes that operate at millimeter and submillimeter (mm/submm) wavelengths and the science enabled by them; science with the potential to shed new light on how galaxies and the stars they hold, form and evolve.

Dusty with a Chance of Star Formation - video credit: Helen Hill
“Close to ninety eight percent of the photons in the universe fall within the mm/submm portion of the electromagnetic spectrum,” Wilson explains. “Sources span all spatial scales and the entire observable history of our universe, consequently it’s a part of the spectrum that is rich with evidence of how astronomical structures form and evolve.”
Wilson says, “The Milky Way has about two hundred billion stars and has been around for a long, long time in the history of the universe. We'd like to know how it came to be so? When we look at nearby galaxies we see the same thing: Billions, to hundreds of billions of stars. When did these galaxies get their stars? What were the processes by which gas in the galaxy actually got transformed into stars?
Unlike in other wavebands in astronomy, where the further away an object is the dimmer it becomes, at millimeter wavelengths bright, dusty sources actually stay bright, even when they're all the way across the universe, allowing astronomers to simultaneously capture both nearby galaxies and distant galaxies (dating from around when the very first galaxies formed) together in the same image at the same brightness.
Although this is a disadvantage in that it masks a galaxy’s proximity, Wilson explains it is also an opportunity in that it reveals galaxies undetectable in other wavebands. “Because big balls of dust have a brightness that is independent of how far away that ball of dust is from us, we can image galaxies that even the Hubble Space Telescope is completely blind to,” says Wilson, adding that in some cases, the most distant galaxies can be the brightest galaxies in his image.
Unfortunately, however, between their faintness at nearly all wavelengths and until recently, the low signal/noise ratio of the existing mm/submm data of the galaxies Wilson is interested in, identification of sources and follow-up investigations have been greatly hindered but “these are exciting times to be working in this part of the spectrum,” says Wilson. “The confluence of recent innovations in sensitive mm wavelength detectors along with the commissioning of the Large Millimeter Telescope (LMT), and first-science with the Atacama Large Millimeter/ submillimeter Array (ALMA) – two new and fundamentally transformative facilities in astronomy – now offers unprecedented potential for new scientific discovery.”
For more than a decade Wilson, who observes at the LMT, the 50-meter diameter mm-wavelength telescope, run jointly by UMass and the Instituto Nacional de Astrofísica, Óptica y Electrónica (INAOE) in Mexico. The LMT is located at the summit of Sierra Negra, an extinct volcano in Puebla, Mexico. Wilson has been using AzTEC, a mm-wavelength camera built by a consortium that he led, to make his observations.
But where AzTEC contains about a hundred detectors, Wilson’s team recently secured NSF funding to build a much larger replacement camera called TolTEC. “Since we built AzTEC about 15 years ago our community has learned how to multiplex detectors and make far larger systems. TolTEC, which will contain seven thousand detectors and observe in three different wavelength bands simultaneously, will yield an entirely new view of the dust enshrouded universe,” Wilson explains.
A major challenge for all ground-based astronomy is the atmosphere overhead and, in particular at millimeter wavelengths, atmospheric water. Wilson says, “If you ask about all mm-wavelength telescopes on Earth, you'll find them either at very high altitudes or in deserts. In the case of the LMT we're on a mountain top at an elevation of fifteen thousand feet.” Even so, the residual water in the atmosphere above the telescope provides a competing signal that's significantly brighter than the galaxies Wilson seeks to image, requiring him to do advanced computational manipulations and filtering to extract the relevant signal.
“Because the atmospheric signal is about a thousand times brighter than anything we're trying to look at, our work involves advanced computational techniques: principle component analysis, a lot of Markov chain Monte Carlo analyses,” explains Wilson.
At the same time, using TolTEC will involve an enormous increase in throughput of data: TolTEC is set to produce about a terrabyte of data each night that it observes. To handle this, Wilson will install a high performance computational system at the MGHPCC to do the atmospheric subtraction calculations and then build the maps of the sky.
Although Wilson recognizes it's a difficult computational challenge he is confident his team will be able to achieve their goal. “We’ve done it at smaller scales before and we think we know how to scale up,” he says. “With the power of the computational system we'll have at the MGHPCC we expect to be just fine.”
“Using TolTEC we'll have a mapping speed and ability to image the universe at roughly fifty times the rate we currently can with AzTEC,” says Wilson. “And with a resolution of just five arc seconds at its highest frequency band, TolTEC will enable us to very carefully discriminate between galaxies, clusters, comets, and planets. Using TolTEC and the LMT I am excited to be able to go back and look at different galaxies going further and further back in time through the universe's history to begin to address how star formation took place in them, and, by extrapolation, how star formation will or won't happen off into the future.”
Story image: Antennae Galaxy - Image Credit: Hubble/European Space Agency

Tags:
featured, research, video
Previous Post:
«
Mercado on Main
Next Post:
NSF-funded project seeks to engage Middle School girls in robotics learning to boost interest in computer science and STEM skills
»
Do you have news about research using the MGHPCC? If so get in touch.
Email Us