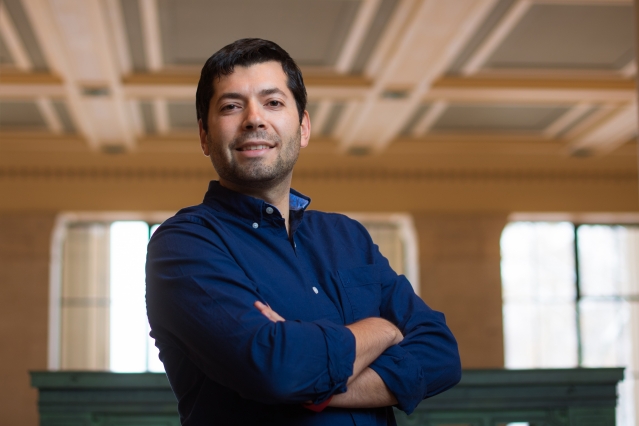 To avoid the most destructive consequences of climate change, the world’s electric energy systems must stop producing carbon by 2050. It seems like an overwhelming technological, political, and economic challenge — but not to Nestor Sepulveda.

“My work has shown me that we do have the means to tackle the problem, and we can start now,” he says. “I am optimistic.”

Sepulveda’s research, first as a master’s student and now as a doctoral candidate in the MIT Department of Nuclear Science and Engineering (NSE), involves complex simulations that describe potential pathways to decarbonization. In work published last year in the journal Joule, Sepulveda and his co-authors made a powerful case for using a mix of renewable and “firm” electricity sources, such as nuclear energy, as the least costly, and most likely, route to a low- or no-carbon grid.

These insights, which flow from a unique computational framework blending optimization and data science, operations research, and policy methodologies, have attracted interest from The New York Times and The Economist, as well as from such notable players in the energy arena as Bill Gates. For Sepulveda, the attention could not come at a more vital moment.

“Right now, people are at extremes: on the one hand worrying that steps to address climate change might weaken the economy, and on the other advocating a Green New Deal to transform the economy that depends solely on solar, wind, and battery storage,” he says. “I think my data-based work can help bridge the gap and enable people to find a middle point where they can have a conversation.”

The computational model Sepulveda is developing to generate this data, the centerpiece of his dissertation research, was sparked by classroom experiences at the start of his NSE master’s degree.

“In courses like Nuclear Technology and Society [22.16], which covered the benefits and risks of nuclear energy, I saw that some people believed the solution for climate change was definitely nuclear, while others said it was wind or solar,” he says. “I began wondering how to determine the value of different technologies.”

Recognizing that “absolutes exist in people’s minds, but not in reality,” Sepulveda sought to develop a tool that might yield an optimal solution to the decarbonization question. His inaugural effort in modeling focused on weighing the advantages of utilizing advanced nuclear reactor designs against exclusive use of existing light-water reactor technology in the decarbonization effort.

“I showed that in spite of their increased costs, advanced reactors proved more valuable to achieving the low-carbon transition than conventional reactor technology alone,” he says. This research formed the basis of Sepulveda’s master’s thesis in 2016, for a degree spanning NSE and the Technology and Policy Program. It also informed the MIT Energy Initiative’s report, “The Future of Nuclear Energy in a Carbon-Constrained World.”

Sepulveda comes to the climate challenge armed with a lifelong commitment to service, an appetite for problem-solving, and grit. Born in Santiago, he enlisted in the Chilean navy, completing his high school and college education at the national naval academy.

“Chile has natural disasters every year, and the defense forces are the ones that jump in to help people, which I found really attractive,” he says. He opted for the most difficult academic specialty, electrical engineering, over combat and weaponry. Early in his career, the climate change issue struck him, he says, and for his senior project, he designed a ship powered by hydrogen fuel cells.

After he graduated, the Chilean navy rewarded his performance with major responsibilities in the fleet, including outfitting a $100 million amphibious ship intended for moving marines and for providing emergency relief services. But Sepulveda was anxious to focus fully on sustainable energy, and petitioned the navy to allow him to pursue a master’s at MIT in 2014.

It was while conducting research for this degree that Sepulveda confronted a life-altering health crisis: a heart defect that led to open-heart surgery. “People told me to take time off and wait another year to finish my degree,” he recalls. Instead, he decided to press on: “I was deep into ideas about decarbonization, which I found really fulfilling.”

After graduating in 2016, he returned to naval life in Chile, but “couldn’t stop thinking about the potential of informing energy policy around the world and making a long-lasting impact,” he says. “Every day, looking in the mirror, I saw the big scar on my chest that reminded me to do something bigger with my life, or at least try.”

Convinced that he could play a significant role in addressing the critical carbon problem if he continued his MIT education, Sepulveda successfully petitioned naval superiors to sanction his return to Cambridge, Massachusetts.

Since resuming studies here in 2018, Sepulveda has wasted little time. He is focused on refining his modeling tool to play out the potential impacts and costs of increasingly complex energy technology scenarios on achieving deep decarbonization. This has meant rapidly acquiring knowledge in fields such as economics, math, and law.

“The navy gave me discipline, and MIT gave me flexibility of mind — how to look at problems from different angles,” he says.

With mentors and collaborators such as Associate Provost and Japan Steel Industry Professor Richard Lester and MIT Sloan School of Management professors Juan Pablo Vielma and Christopher Knittel, Sepulveda has been tweaking his models. His simulations, which can involve more than 1,000 scenarios, factor in existing and emerging technologies, uncertainties such as the possible emergence of fusion energy, and different regional constraints, to identify optimal investment strategies for low-carbon systems and to determine what pathways generate the most cost-effective solutions.

“The idea isn’t to say we need this many solar farms or nuclear plants, but to look at the trends and value the future impact of technologies for climate change, so we can focus money on those with the highest impact, and generate policies that push harder on those,” he says.

Sepulveda hopes his models won’t just lead the way to decarbonization, but do so in a way that minimizes social costs. “I come from a developing nation, where there are other problems like health care and education, so my goal is to achieve a pathway that leaves resources to address these other issues.”

As he refines his computations with the help of MIT’s massive computing clusters, Sepulveda has been building a life in the United States. He has found a vibrant Chilean community at MIT and discovered local opportunities for venturing out on the water, such as summer sailing on the Charles.

After graduation, he plans to leverage his modeling tool for the public benefit, through direct interactions with policy makers (U.S. congressional staffers have already begun to reach out to him), and with businesses looking to bend their strategies toward a zero-carbon future.

It is a future that weighs even more heavily on him these days: Sepulveda is expecting his first child. “Right now, we’re buying stuff for the baby, but my mind keeps going into algorithmic mode,” he says. “I’m so immersed in decarbonization that I sometimes dream about it.”