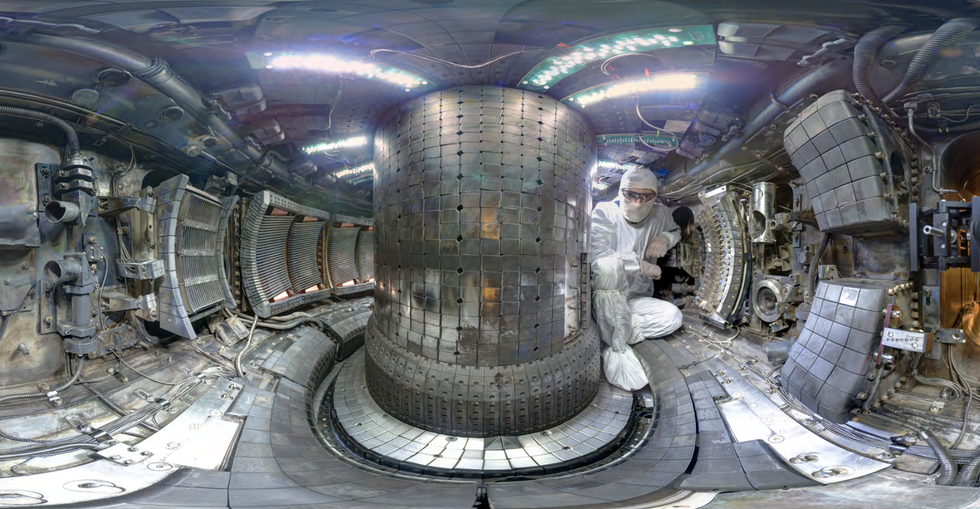 MIT Plasma Science and Fusion Center (PSFC) doctoral graduate Francesco Sciortino has been leaning on MGHPCC computers in his research seeking to bring the process that fuels the stars down to Earth.

Reporting by Helen Hill for MGHPCC

Francesco Sciortino, a recent doctoral graduate in the Plasma Science and Fusion Center (PSFC) at MIT, was not shy in leveraging MGHPCC’s computing resources during his doctoral studies into plasma turbulence in fusion experiments.

Turbulence, a ubiquitous feature of the high-energy plasmas needed to instigate nuclear fusion, can severely limit tokamak performance and our ability to make fusion energy a commercial reality. In his Ph.D. research, Francesco leaned heavily on MIT’s Engaging Cluster as he sought to advance understanding of the effects of turbulence on particle dynamics inside tokamak fusion devices like the Alcator C-Mod tokamak at MIT and the DIII-D tokamak at General Atomics, in San Diego, CA.

“For my Ph.D. research, I wanted to explore how turbulence in fusion experiments impacts the associated particle dynamics,” says Francesco. “Inside tokamaks - the toroidal devices we use to try to make fusion happen - matter is super-heated, causing it to become ionized, i.e. electrons and nuclei cease to be electrically bound to each other. The result is a “soup” of charged particles which we call “plasma” – not unlike the one in stars. Tokamaks confine these high-energy plasmas using magnetic fields, preventing charged particles from escaping the device or touching the machine walls. If they were to come into contact with material surfaces, they would melt them rapidly, since these plasmas can reach 100 million degrees! Ensuring that plasmas are confined effectively is therefore extremely important.”

“My specific focus was on the quantification of metrics to better understand the effects of plasma turbulence,” says Francesco. “As part of this, I used computers at the MGHPCC to create a Bayesian inference framework to compare experimental data with our most sophisticated theoretical models. Ultimately, I developed an open-source code (https://aurora-fusion.readthedocs.io) that can be iteratively run on a computing cluster. I could not have done this without adequate computing resources: having ready access to MIT's Engaging Cluster at the MGHPCC allowed me to focus on what would be the best approach, without having to worry too much about having enough CPUs.”

“In my most recent paper, I applied this Bayesian inference framework to a number of tokamak experiments to determine whether our most advanced theoretical models correctly describe the complex dynamics observed in the experiments,” says Francesco. Effectively, this boiled down to quantifying ‘transport coefficients’ of particle diffusion and convection across the plasma and examining any discrepancies between theory and experiment. To do this required developing physical models that accurately describe measurements, in particular atomic spectra. The amount of data and complexity of these models demanded highly effective parallelization, and consequently advanced computing resources. The result of this investigation was that we observed some discrepancies in predictions of impurity density profiles – meaning that our theoretical models may be under-estimating the performance of future fusion reactors. This conclusion is currently being corroborated by analysis on other experiments worldwide, and we hope that it will attract the attention of the plasma turbulence theory community to address these observations.”

Francesco says the findings in this latest paper are among the most detailed of their type ever achieved, combining high-quality spectroscopic measurements, modern computational statistics, and advanced theoretical predictions. He says they also illustrate the importance of specific physical effects, particularly those related to neutral particles near the device wall of fusion devices, which have often been ignored in the past but must clearly be taken into consideration in future work on plasma edge analysis.

Francesco Sciortino describes himself as a physicist, a mountain lover, and a team organizer. For now, though, having completed his Ph.D. in fusion energy and plasma physics at MIT, he is working as a postdoctoral researcher at the Max Planck Institute for Plasma Physics in Munich, Germany where he says he is turning his attention to the problem of particle and heat dynamics in the so-called “divertor region” of tokamaks, where some of the greatest challenges associated with magnetic confinement fusion are. "I am trying to maintain a balance of experimental analysis and theoretical modeling work, mostly working on the ASDEX-Upgrade tokamak in Germany. I have chosen to work on divertor physics because this is a critical challenge for fusion energy and I want to be on the front lines. Understanding how to mitigate the extreme conditions on material surfaces in tokamak divertors requires an approach, not unlike the one taken in my Ph.D., where we iterate between new measurements, integrated modeling, and theoretical advances. Having learned the tools-of-the-trade during my time at MIT, I am excited to get to work using them as we continue to try to bring fusion from the stars down to Earth."

Tags:
research
Previous Post:
«
February Publications
Next Post:
Baker-Polito Administration Celebrates Completion of Make Ready Work, Critical to Extending Broadband to “Last Mile” Towns
»
Do you have news about research using the MGHPCC? If so get in touch.
Email Us