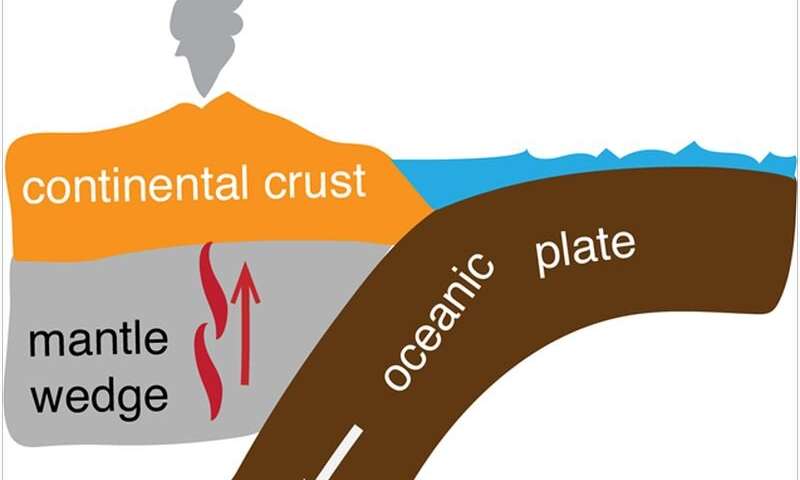 Piecing Together the Alaska Coastline's Fractured Past

Read this story at UMass News
AMHERST, Mass. – Among seismologists, the geology of Alaska’s earthquake- and volcano-rich coast from the Aleutian Islands to the southeast is fascinating, but not well understood. Now, with more sophisticated tools than before, a University of Massachusetts Amherst team reports unexpected new details about the area’s tectonic plates and their relationships to volcanoes.
Plate tectonics – the constant underground movement of continental and ocean shelves, is often characterized by “subduction zones” where plates clash, one usually sliding under another. Many are prime earthquake- and volcano-prone regions.
Lead author Xiaotao Yang says, “For a long time, the whole central Alaska region was thought to have one simple subduction plate. What we discovered is that there are actually two major subduction slabs. It’s a surprise that we see differences between these two slabs and the associate mantle materials.” Overall, Yang says the new research shows, “there are many more subtleties and variations that we had not seen before.”
Yang, who did this work at UMass Amherst with co-author Haiying Gao, is now on the faculty at Purdue University. Writing in the Journal of Geophysical Research: Solid Earth they point out that central Alaska is “an ideal place to investigate subduction segmentation and its correlation with volcano distribution” because “it is not clearly understood what controls the distribution of arc volcanoes.”

Yang says their study highlights how complex a subduction zone can be and how this complexity may control volcano distribution. It also helps to clarify a long-standing question in seismology: what determines whether volcanoes are present and whether they are in a linear arc, or in clusters. Yang says it depends in part on whether rocks deep in the mantle above the subducting slab melt into magma, and how magma is stored in the crust.
For their investigations, Yang and Gao used a powerful seismic imaging technique that Yang says is similar to a medical CAT scan of the Earth. With it, they constructed a detailed seismic velocity model of the Aleutian-Alaska margin from crust to the uppermost mantle. Seismic velocity refers to the rate at which a seismic wave travels through a material such as magma or crust. Waves travel more slowly through low-density, low-velocity material compared to surrounding rocks, for example, he says.
The researchers’ new model reveals multiple downgoing slabs, with various seismic velocities, thicknesses and dip angles, they write. Yang adds, “Once we got to look at the two central Alaska volcanoes for the first time in a really precise way, what we see is a much more complicated subduction system than we knew before. This new information about the complexity helps us to understand the distribution of volcanoes in Alaska. It’s all more complicated than the tools could show us before,” he adds.
Their findings help to explain why there is a break in the arc of volcanoes called the Denali Volcanic Gap, Yang says. Below it is a wedge-shaped region of high seismic velocity material above the subduction plate but below the mantle. It is relatively cold and dry with no melting, which explains why there is no volcano in the region.
By contrast, the cluster of volcanoes in the Wrangell Volcanic Field do not have the same signature, he adds. The Wrangell volcanoes have distinctly low seismic velocity material in the crust. It’s a rather large magma reservoir that may explain why they’re in a cluster instead of an arc, Yang says, though “the fact that it’s there helps to explain where the magma came from for past eruptions.”
This study was made possible by the National Science Foundation’s (NSF) array of seismic sensors in Alaska, part of its EarthScope Transportable Array program, Yang notes. His co-author Gao had startup funding from UMass Amherst and an NSF CAREER grant. They also used computational resources at the Massachusetts Green High Performance Computing Center in Holyoke.
Yang says that their work adds to seismologists’ understanding of volcano distribution in the Cascades in the Pacific Northwest, South America and the south Pacific. He hopes to follow up with more detailed analyses of magma reservoirs in the crust, how volcanoes are fed and particularly, whether Aleutian volcanoes have magma in the crust.
Story Image: Schematic diagram showing the geometry of a typical subduction zone and the production of arc volcanoes. Credit: Xiaotao Yang

Tags:
research
Previous Post:
«
NOVEMBER PUBLICATIONS
Next Post:
UMass Amherst @ SC20
»
Do you have news about research using the MGHPCC? If so get in touch.
Email Us