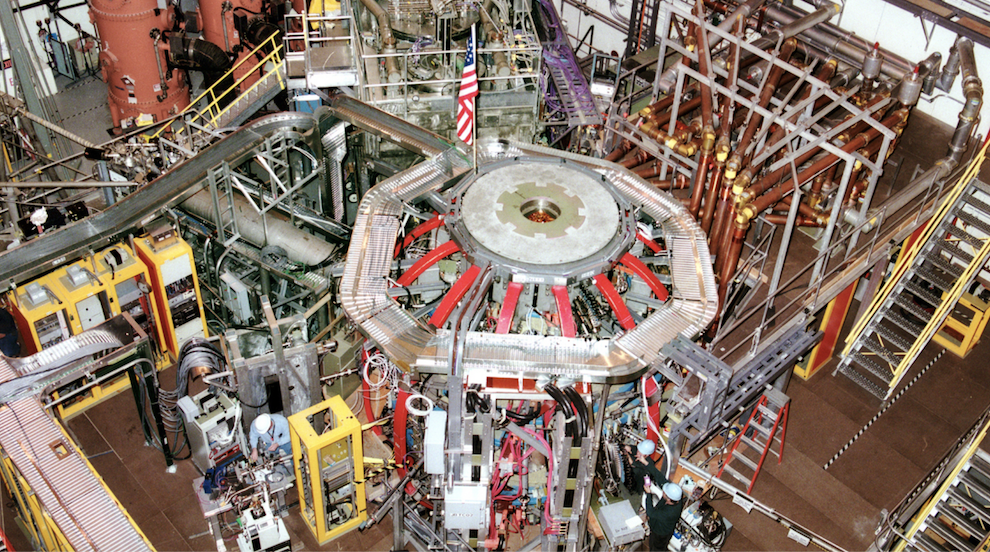 Turbulence — the unruly swirling of fluid and air that mixes coffee and cream and can rattle airplanes in flight — causes heat loss that weakens efforts to reproduce on Earth the fusion that powers the sun and stars. Now scientists have modeled a key source of the turbulence found in a fusion experiment at the U.S. Department of Energy’s (DOE) Princeton Plasma Physics Laboratory (PPPL), paving the way for improving similar experiments to capture and control fusion energy. The research used computer resources at the MGHPCC.
Read this story at DOE Science News
State of the art simulations
The research, led by Juan Ruiz Ruiz while a graduate student at the Massachusetts Institute of Technology (MIT) and working with PPPL researchers Walter Guttenfelder and Yang Ren, used state-of-the-art simulations to zero-in on the source of the turbulence that produces heat loss. The findings predicted results consistent with experiments on the National Spherical Torus Experiment (NSTX) fusion device at PPPL, pinpointing the source as microscopic turbulent eddies. Driving these eddies is the gradient, or variation, in the electron temperature in the core of the plasma, the so-called electron temperature gradient (ETG).
Fusion combines light elements in the form of plasma — the hot, electrically charged state of matter composed of free electrons and atomic nuclei — that generates massive amounts of energy. Scientists around the world are seeking to replicate fusion on Earth for a virtually inexhaustible supply of power to generate electricity.
The recent findings confirmed theories of when ETG can be a main driver of electron turbulence, known as electron thermal transport, that whips up the heat loss in spherical tokamaks such as NSTX.  The consistency of the simulation with experimental data gives confidence “that the simulation contains the necessary physics to explain the loss of heat,” said Ruiz Ruiz, now a postdoctoral research assistant at the University of Oxford and first author of a paper reporting the results in Plasma Physics and Controlled Fusion.
The results apply to a type of H-mode, or high-confinement, experiment on the spherical NSTX, which is shaped more like a cored apple than the doughnut-like shape of more widely used conventional tokamaks. Understanding the source of electron thermal transport is a top priority for confining heat in future fusion facilities, and particularly in spherical tokamaks, which lose most of their heat through such transport in high-performance H-mode plasmas.
A little like radar
Ruiz Ruiz reached his conclusion by simulating a diagnostic called “high-k scattering” that NSTX researchers used to measure turbulence in the experiment. The technique scatters microwave radiation into the plasma, with the scattered radiation carrying information about the turbulence in the core. The process works a little like radar or sonar, Ruiz Ruiz says. The radiation bounces off objects — plasma eddies the size of electron orbits in this case — and reflects back their movement and positions.
Comparing the simulated and measured data called for painstakingly filtering and analyzing the vast output produced by the simulation code that Ruiz Ruiz used. “It takes a huge amount of effort to do an apples-to-apples comparison of the measured and simulated turbulence,” said Guttenfelder, who co-advised Ruiz Ruiz with an MIT professor. “Juan did just about the most thorough job you could do to show that the model is consistent with all the experimental data.”
Similar methods could be used to confirm the source of heat loss on the upgraded NSTX, called the NSTX-U, and the Mega Ampere Spherical Tokamak (MAST) in the United Kingdom, Ruiz Ruiz said. “That could demonstrate the ability of the simulations to accurately forecast the loss of heat — and therefore the performance — of spherical tokamaks,” he said.
Support for this work comes from the DOE Office of Science. Computer simulations were conducted at the National Energy Research Scientific Computing Center (NERSC), a DOE Office of Science user facility at the Lawrence Berkeley National Laboratory, and Massachusetts Green High Performance Computing Center, operated jointly by five Massachusetts research universities.
PPPL, on Princeton University's Forrestal Campus in Plainsboro, N.J., is devoted to creating new knowledge about the physics of plasmas — ultra-hot, charged gases — and to developing practical solutions for the creation of fusion energy. The Laboratory is managed by the University for the U.S. Department of Energy’s Office of Science, which is the single largest supporter of basic research in the physical sciences in the United States and is working to address some of the most pressing challenges of our time. For more information, visit energy.gov/science.

Tags:
research
Previous Post:
«
The Giant in our Stars
Next Post:
Professor discovers way to differentiate individual black holes
»
Do you have news about research using the MGHPCC? If so get in touch.
Email Us