The Massachusetts Green High Performance Computing Center is designed with features that make it one of the most energy-efficient and environmentally sensitive data centers around. 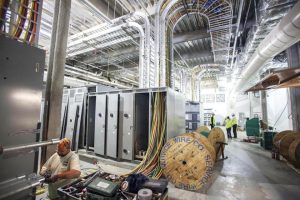 Read this story in the Boston Globe
HOLYOKE — On a block-long industrial site, once home to an air bag maker and water filter manufacturer, an advanced computing center is taking shape. When the facility begins operating in November, thousands of networked computers will allow researchers to crunch vast amounts of data to sequence genes, model the ocean, or study the effects of new drugs on patients.
But innovations at the center don’t end with its massive computing power. The Massachusetts Green High Performance Computing Center is also designed with features that make it one of the most energy-efficient and environmentally sensitive data centers around.
Data centers are notorious energy hogs, sucking up power 24 hours a day, 365 days a year, and accounting for about 2 percent of the nation’s energy consumption, according to a 2011 report by Jonathan G. Koomey, a consulting professor at Stanford University. Many use electricity generated by coal-fired power plants, considered one of the dirtiest sources of energy.
But the Holyoke center, through the choice of its power supply, design of the cooling systems, and other measures, is expected to use at least 25 percent less energy than the typical data center. The focus on efficiency is being driven by the increasing need for more computing power, which can be expensive, said Claude Canizares, vice president for research and associate provost at the Massachusetts Institute of Technology.
“Running one of these computer centers uses megawatts and, as my colleague likes to say, megawatts cost megabucks,” Canizares said. “Efficiency really translates into dollars.”
The $95 million center is a joint venture of MIT, Harvard University, the University of Massachusetts, Boston University, and Northeastern University, as well as the technology giants EMC Corp. and Cisco Systems Inc. Its site in downtown Holyoke, bracketed by canals that helped to power mills, was selected in 2009. Construction started in the summer 2011.
The center’s innovations start at Holyoke’s dam on the Connecticut River, which generates hydroelectricity that is sold to industrial users for about 8 cents a kilowatt hour, compared to a state average of 12.59 cents, according to the US Energy Department. Hydropower isn’t only cheap, it’s considered clean because it doesn’t rely on fossil fuels.
“Almost the very first decision about the center was where to locate it,” said John Goodhue, its executive director. “Holyoke immediately jumped out because of the hydro facility and the opportunity to take power . . . from renewable resources.”
The chance to reuse a stagnant industrial site in this long-struggling mill city also appealed to the center’s backers, who believe the center will promote other development in the area. Some buildings that were razed on the 8.6-acre property gave construction crews materials that were used to build up the foundation of the new building, Goodhue said.
In all, about 80 percent of the old structures were recycled.
The new 90,000-square-foot building features louvered windows, which can be opened like vents to let in cold air to cool the space. A bank of flywheels, which use spinning disks or bearings in a near-frictionless environment to store energy until it is needed, has been installed to act as a back-up power source in the event of blackout.
In the next room over, a construction crew worked among large water chillers, finishing the pipe system that will feed cold water into the computer room to help keep the machinery from overheating.
The chillers, Goodhue said, were located below the computers so the water would not have to travel far and “you don’t lose any cooling power.”
“The green is as much about how you build the building as [it is about] how it runs when it’s done,” he said.
One of the biggest energy-saving features, Goodhue added, is the layout of the computer room. Instead of filling the cavernous space with rows of computers cooled by air conditioners positioned along the walls, the builders decided to group 20 to 30 computers in enclosed pods, each with cooling units.
“You literally contain the hot air in a small area on the floor and feed it directly to the air conditioners,” Goodhue said.
The center’s thousands of computers will consume about 10 megawatts of electricity, enough to power 5,000 to 10,000 homes. (A megawatt can power 500 to 1,000 average homes.) Another two or three megawatts will power the rest of the building. That is significantly less power than what is consumed by a typical data center, which might use 20 megawatts in all, Goodhue said.
Jeffrey Nick, EMC’s chief technology officer, said such efficiencies are becoming more important as researchers look to crunch larger and larger amounts of data without increasing energy consumption, costs, and ultimately the price tag of accessing the computing center.
He added that he expects the Holyoke center to become a model of efficiency used to design other data centers.
“Power is becoming such a significant factor in overall data center cost that given the motivation to harness more and more [computing] power,” Nick said, “the efficiency of the data center in terms of power and cooling turns into an extremely important factor.”
&nbsp;

Tags:
Previous Post:
«
Equipment Begins Move into New Holyoke Computing Center
Next Post:
Cool Running
»
Do you have news about research using the MGHPCC? If so get in touch.
Email Us