by Helen Hill | MGHPCC News
MGHPCC affiliated teams from Northeastern University and UMass Boston battle for cluster building supremacy at annual HPC competition.
Since 2007 students from around the globe have been pitting their code, their clusters, and themselves against each other in the annual Student Cluster Competition held in conjunction with the SC (Supercomputing) Conference Series.
Among the 14 teams invited to compete in this year’s competition were two with MGHPCC connections: the Huskies with Accelerated Computing Kernels (HACKs) representing Northeastern University, and the Boston Green Team made up of students from the University of Massachusetts, Boston.
Designed to introduce the next generation of students to the high-performance computing (HPC) community, the Student Cluster Competition seeks to teach and inspire students to pursue careers in HPC by exposing them to the breadth of skills, technologies, and science that it takes to build, maintain and utilize supercomputers.
The weeklong event culminates in a real-time, non-stop, 48-hour challenge, during which the teams of undergraduate and/or high school students assemble small clusters on the exhibit floor, and race to complete real-world workloads across a series of applications with the goal of impressing HPC-industry judges. 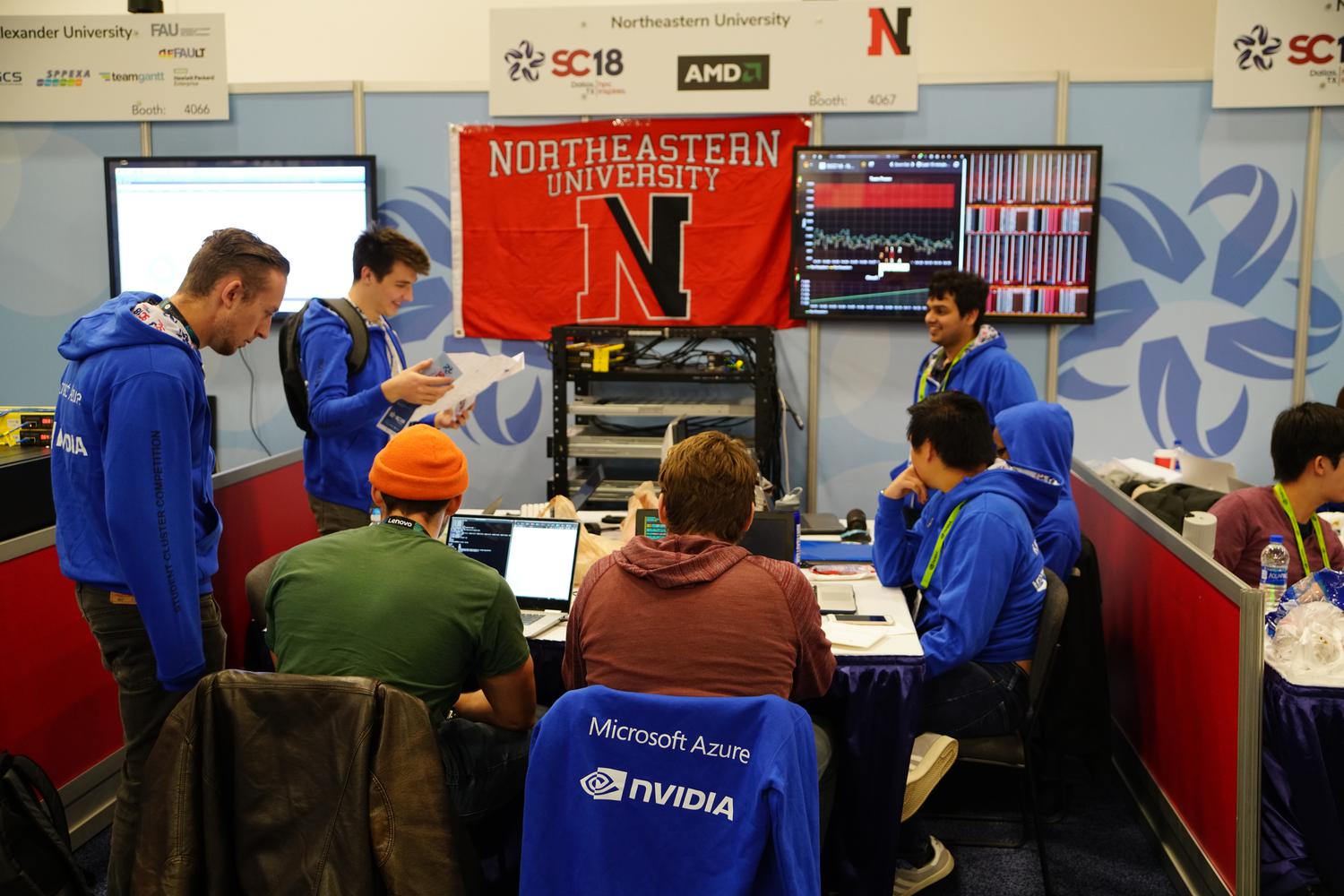 HACKs team member Jason Booth was impressed with how quickly his team got up to speed for the competition despite having to prepare remotely while members were on co-op. "We had five new members this year but they did an awesome job of rebuilding the team and learning quickly," he said. "There was one point during our preparation where we had two team members in Maryland, two in California, and two elsewhere in Massachusetts. Some of our teammates met in person for the first time at the competition."
All members of the HACKs team have interests in HPC and are taking classes or doing research in the field. “This competition was a great opportunity to get first-hand experience and meet industry leaders at the SC18 conference,” reflects Jason who says he particularly enjoyed the cloud component of the competition for providing great exposure to new technologies and ways of computing. 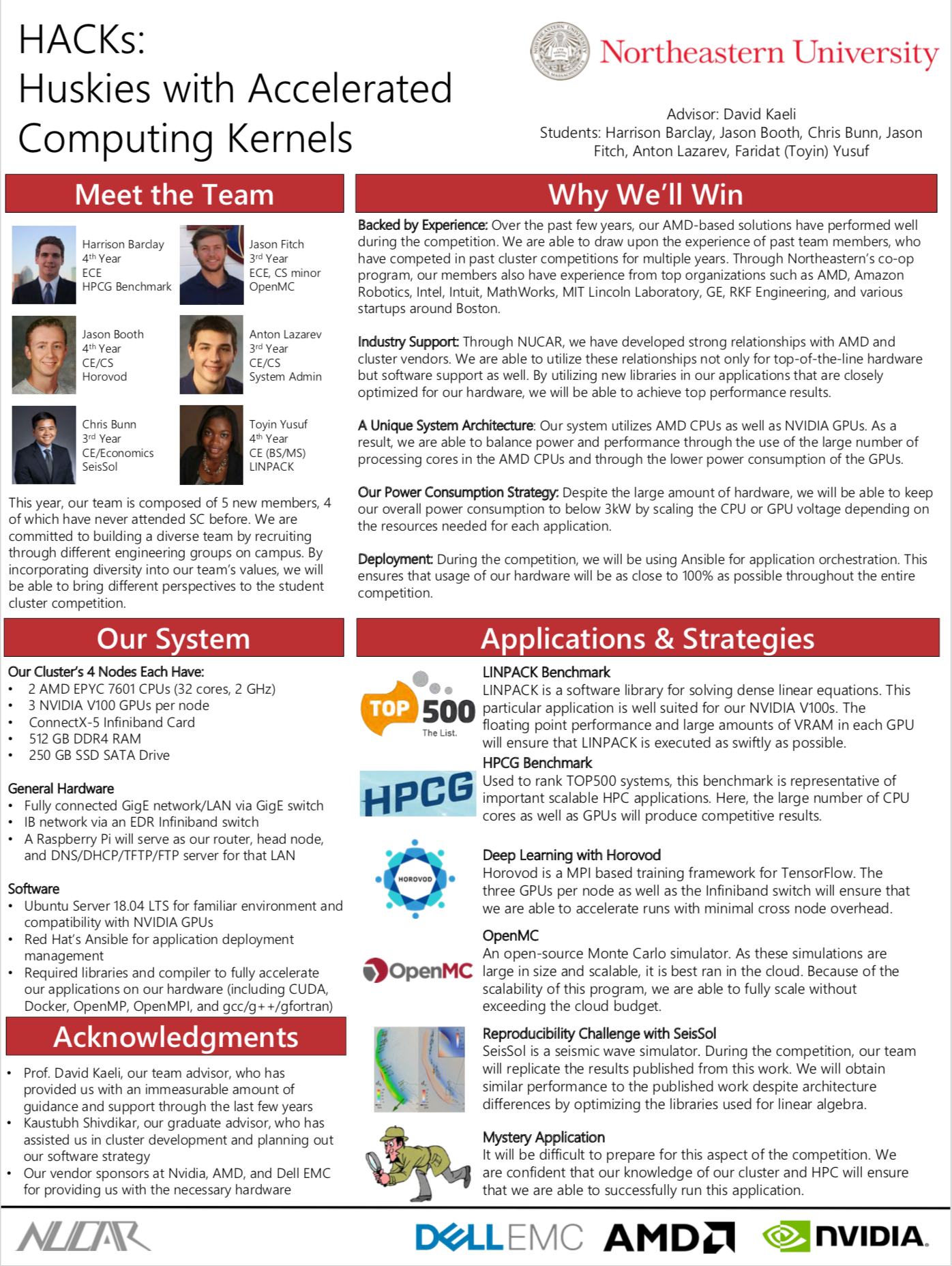 The Northeastern University team poster. “To gain a competitive edge against their competitors and to stay below the power limit, this year the HACKs cluster leveraged low power AMD CPUs.” Jason explained they also used docker to manage dependencies for each application, which they found to be not only a very useful tool for development and testing but “really great to learn along the way." The 2018  team was mentored by Professor David Kaeli aided by graduate student Kaustubh Shivdikar . 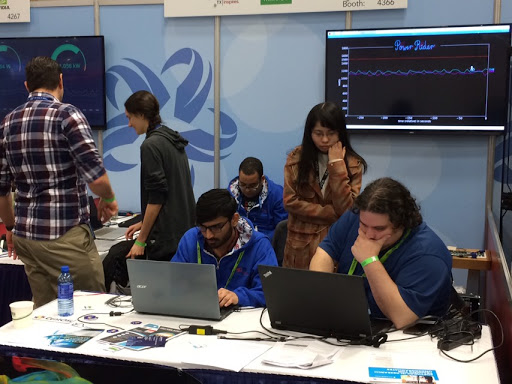 Like Northeastern’s team, the Boston Green Team has been participating in the Student Cluster Competition for several years and also had a number of returning team members this year. “Their experience definitely helped the newcomers come into the competition with a better sense of what to expect,” reflects team member Kristen Laird, herself new to the team this year. 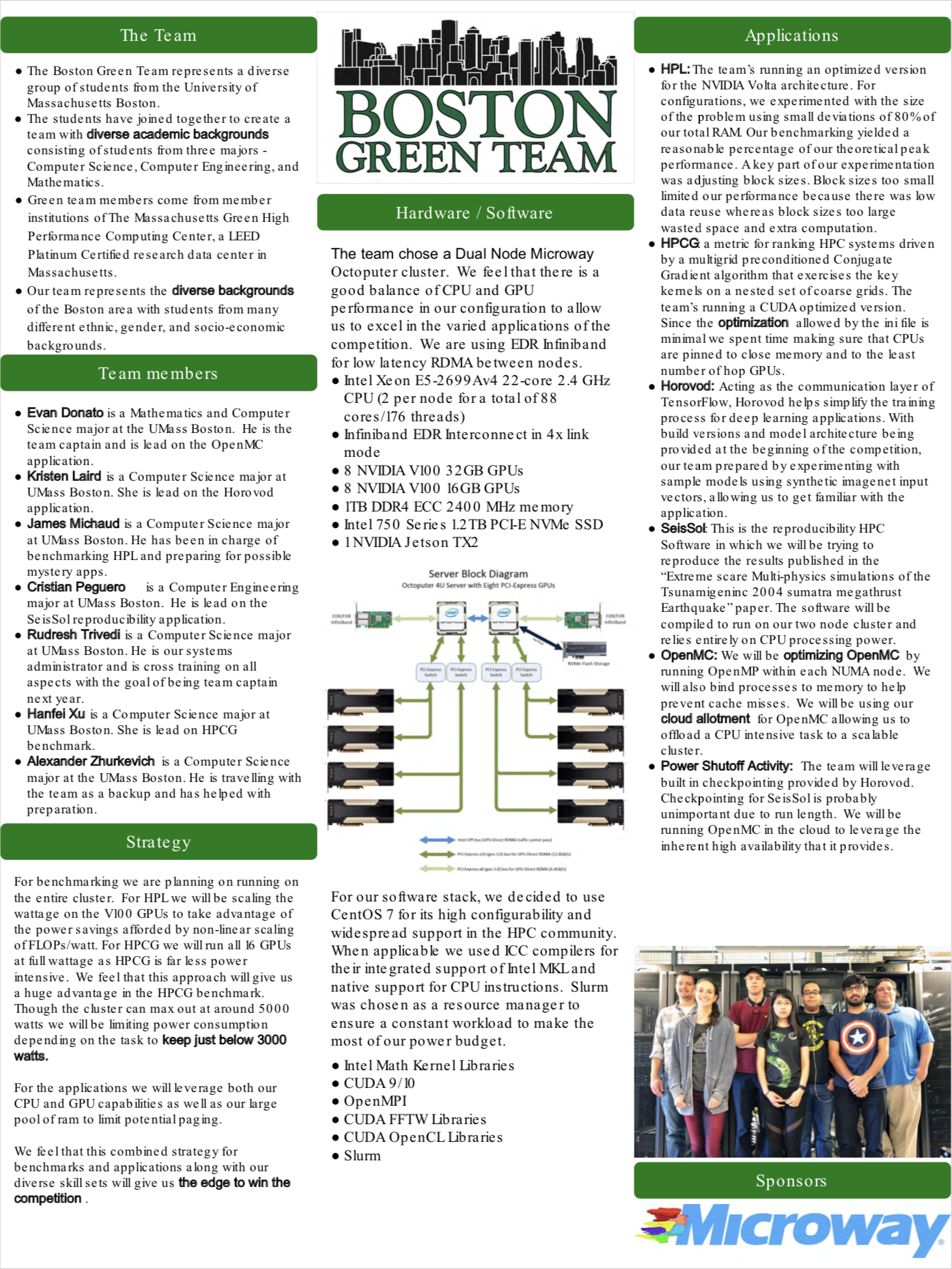 The UMass Boston team's poster: “We chose a cluster with high GPU density after seeing that the planned applications would benefit heavily from this approach.  We had two nodes both with 8 NVIDIA V100 GPUs and 2 sockets with 36 Intel Xeon Gold cores on one node and 44 Broadwell on the other,” Kristen explains. “We had a total of 1.2tb ram between the two nodes and used InfiniBand EDR as in interconnect.  This setup allowed us to downclock the GPUs on throughput heavy applications like HPL to take advantage of non-linear scaling of FLOPS/Watt performance while still being able to tackle CPU compute tasks well.” The 2018 UMass Boston team was mentored by Ming Ouyang.

“The SC18 competition taught us a lot about how to work well together as an enthusiastic team and learned a lot from the hands-on experience in designing, building, and running a computing cluster as well as how to tune HPC applications for a multi-node system,” says Kristen who is already looking ahead to next year: When asked what they might do differently next time she says, “We would “parallelize” our practice sessions and spend more time separately working on our applications during meetings. Specifically, we might prepare competition dry runs where the team simulates setting up an application and running data on that application. Maybe extend this to other apps in preparation for a mystery app.”

This year neither MGHPCC team came out on top - the prize went to the team from Tsinghua University, China, but the value was as much in the opportunity to take part as in winning: “We had many interactions with other teams and have made friendships across the United States and the world,” says Jason. “The students on these teams will become leaders in HPC and are invaluable connections as we progress into our future.”

Tags:
research
Previous Post:
«
The New Research Computing Q&A: Ask.CI
Next Post:
Big Data. Monster Storage: The Northeast Storage Exchange
»
Do you have news about research using the MGHPCC? If so get in touch.
Email Us