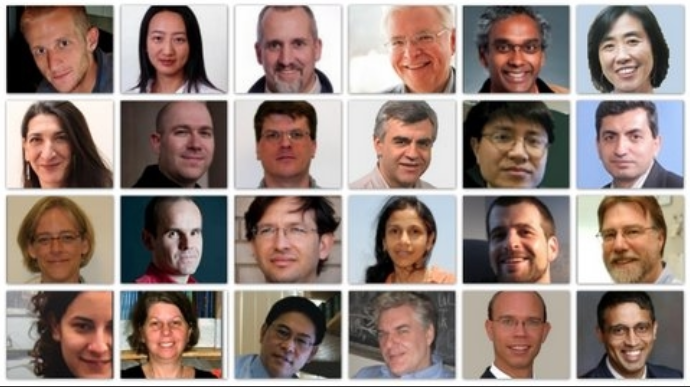 MGHPCC is more than just a building. It is also intended as an engine for future research. To seed interest in and raise awareness of the new facility, last summer the research committee posted a call for funding proposals to the high performance computing communities of MIT, Harvard, BU, UMASS and Northeastern. After careful deliberation, the committee recently announced it's picks.

Even before the completion of construction, the Massachusetts Green High Performance Computing Center (MGHPCC) has sparked research collaboration among Boston’s research universities on a variety of significant scientific challenges, awarding $600,000 in seed grants to seven multi-university teams on issues ranging from the ecosystem off the New England coast to medical imaging to the speed of computing itself.
The MGHPCC is designed to promote research collaboration among the participating universities – Boston University, Harvard University, the Massachusetts Institute of Technology, Northeastern University and the University of Massachusetts – through high-performance computing, a pillar of all scientific inquiry today. The seed grant program is intended to accelerate the MGHPCC’s mission of computational collaboration.
“These projects represent precisely the kind of ambitious, scientific endeavor that can really only occur through multi-university collaboration and that the creation of the MGHPCC envisioned,” said Tom Chmura, president of the MGHPCC and vice president for economic development at UMass. “The number and quality of the seed fund applications holds great promise for both science and the success of the MGHPCC.” The seven winners were chosen by a committee of researchers from each of the participating universities, which also funded the seed grants: James Cuff of Harvard, Alain Karma of Northeastern, Azer Bestavros of BU, Jim Kurose of UMass and Chris Hill of MIT. Kurose and Hill are the panel’s co-chairs. “The MGHPCC will provide opportunities for regional computational activities that have been out of reach until now. It is exciting to see the potential broad impact in so many areas ranging from basic science to real-time medical applications,” said Hill, a senior research engineer in the Earth, Atmospheric and Planetary Sciences Department at MIT.
More than $600,000 was awarded, with individual grants ranging from $45K to $130K. The request for proposals sought “novel collaborative research activities addressing significant and challenging problems at the forefront of high-performance technical computing.” Proposals also had to include a strategy for follow-on research that would attract external funding. Applications for another round of seed funding will be sought by the MGHPCC in the fall.
The selected projects span all three of the key facets of research computing: the use of computers as a tool for scientific discovery, development of application software that enable new types of research, and computer science research that points the way toward next generation “exascale” computer systems.
Lorena Barba (Boston University) has teamed up with Cris Cecka (Harvard) and Hans Johnston (UMass Amherst)  to work on future generation “exascale” software platforms, which will be 1,000 times faster than the current computing speed of 1,000 trillion operations per second.
In a study integrating quantum and statistical approaches, Alfredo Alexander-Katz (MIT) and Alán Aspuru-Guzik (Harvard),  will develop high-performance computer code to simulate the kind of energy processing that occurs during photosynthesis in plants. Ultimately, the insights gained from such simulations will be transferred to the engineering domain to increase the energy-efficiency of such devices as solar panels.
To complement the forthcoming deployment  of a state-of-the-art underwater observation platform, part of the NSF-sponsored Ocean Observatories initiative, John Marshall (MIT), Pierre Lermusiaux (MIT), Amala Mahadevan (WHOI) and Amit Tandon (UMass Dartmouth) will create models to provide insights into the turbulent mixing that regulates nutrient cycle and ocean ecosystem dynamics off the New England coast.
In a second multiscale computing effort Hossein Mosallaei and David Kaeli (Northeastern) have teamed up with Efthimios Kaxiras (Harvard)  to create computer models that simulate the behavior of metals, dielectric and magnetic particles at extremely small scales, allowing insights into the behavior of important new materials.
Patricia Ellen Grant (Harvard Med. & Children's Hosp., Boston) and Jonathan Appavoo (BU)  will use high-performance computing to automate medical imaging analysis in a way that will make it easier and less costly to use by radiological clinicians.
Yanlei Diao and Li-Jun Ma (UMass Amherst), together with Samuel Madden (MIT), Yiping Shen and Bai-Lin Wu (Harvard Med. & Children's Hosp., Boston), Toby Bloom (Broad Inst.) and James F. Gusella (M.G.H.), will develop a next-generation, on-demand service for managing and processing massive amounts of genome information.
The final recipients, Ayse K. Coskun and Martin C. Herbordt (BU), and Gunar Schirner (Northeastern)  will explore ways to measure and improve the energy efficiency of large-scale-computing. Energy issues have become a barrier to progress on computer speed.

Tags:
research
Previous Post:
«
Fledgling Holyoke Computer Center Gives $600,000 in Grants
Next Post:
MGHPCC Awards $600,000 in Seed Grants for Promising Research in Wide Range of Scientific Disciplines
»
Do you have news about research using the MGHPCC? If so get in touch.
Email Us